Chicken Tetrazzini is a big, bubbly Italian pasta bake with a creamy cheese sauce, juicy chicken and buttery garlic mushrooms. It’s about as classic as a creamy pasta bake can get! 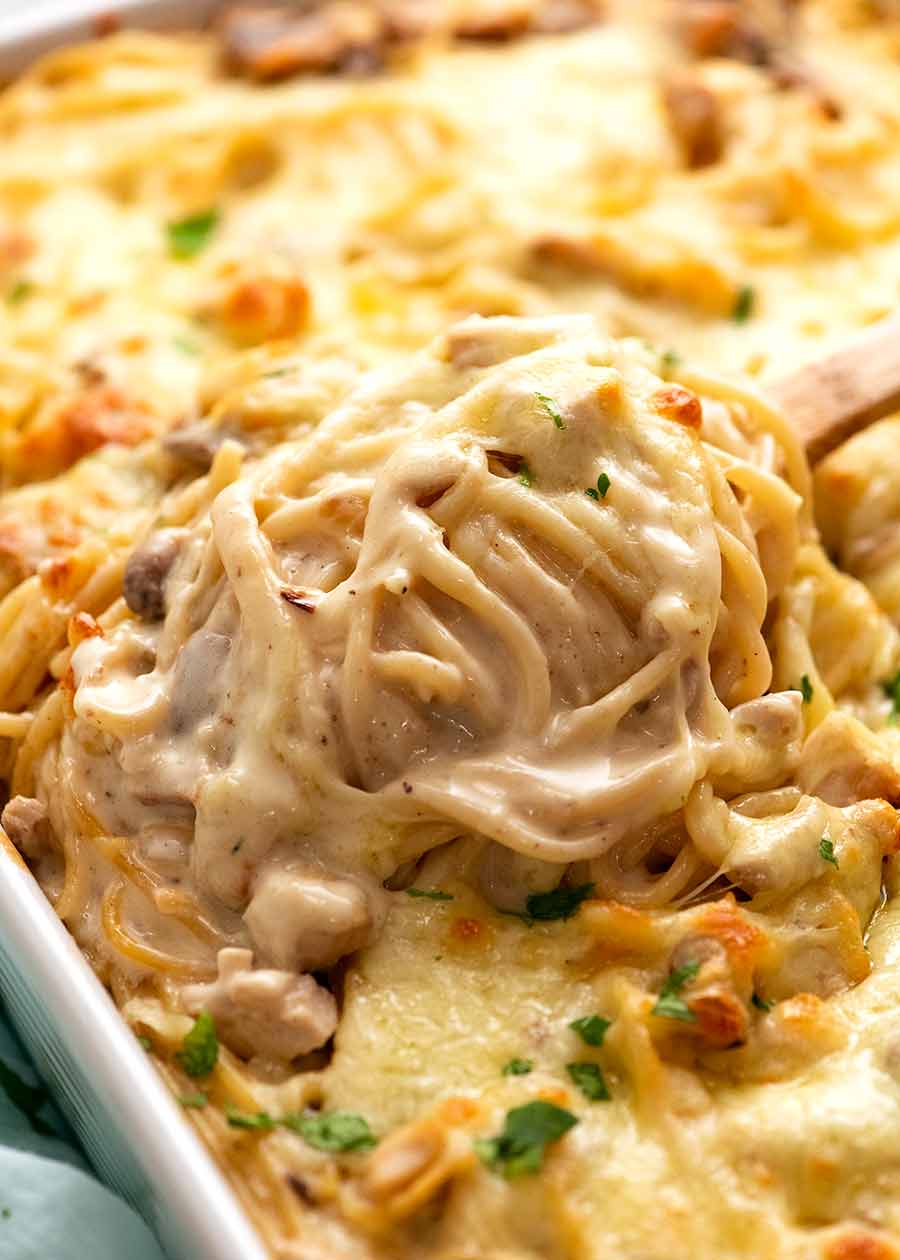 Chicken Tetrazzini is a big, cheesy chicken and mushroom pasta bake that is rumoured to be named after an Italian opera star, Luisa Tetrazzini. It is said that a Chef at a hotel she was staying at invented this dish especially for her.

You don’t need to be able to carry a tune to make this.

You just need to be a creamy pasta bake lover!

This pasta casserole bake is made from scratch. Canned soup has no place around here!! 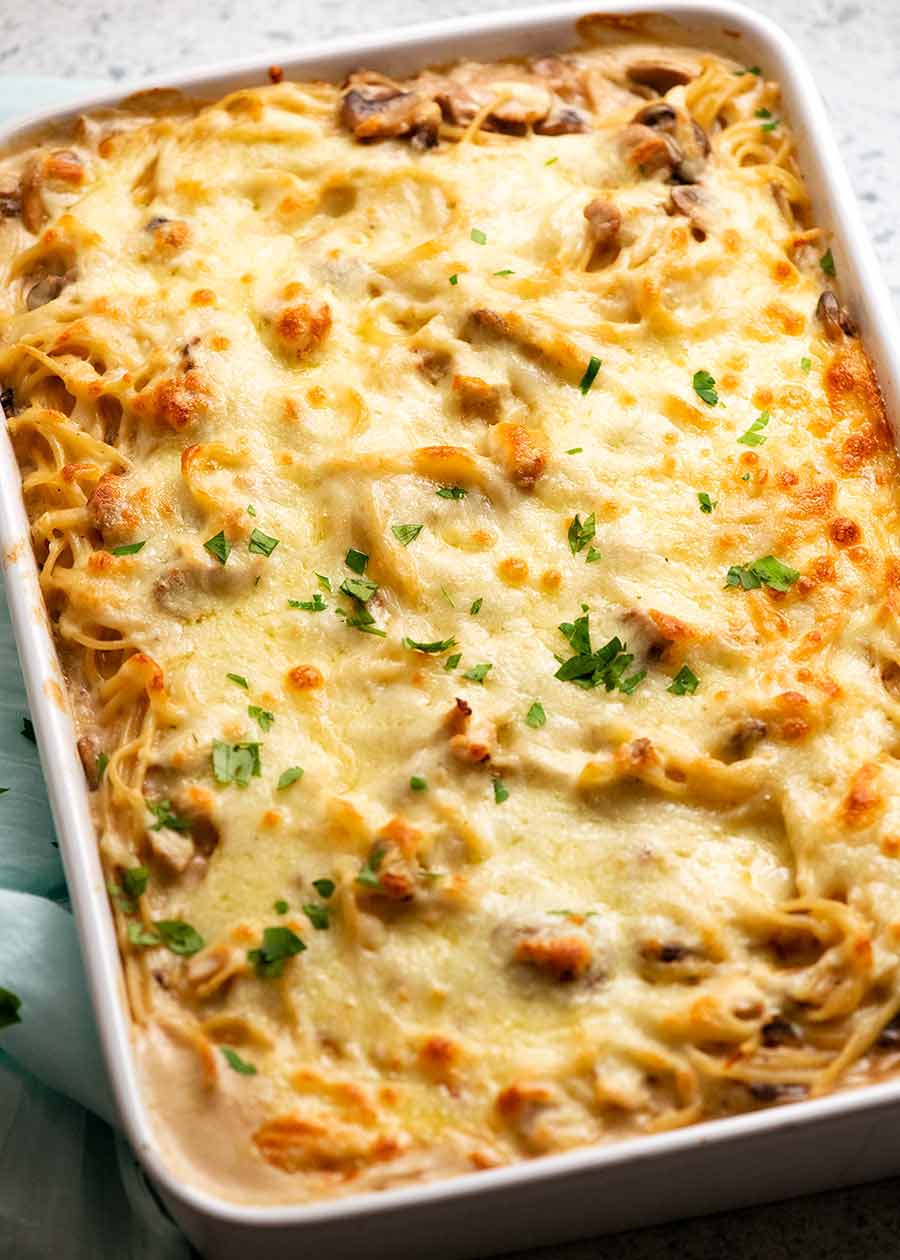 What you need for creamy Chicken Tetrazzini Sauce

Here’s what you need to make the cream sauce for Chicken Tetrazzini: butter, flour, chicken broth/stock, milk, cream and cheese. 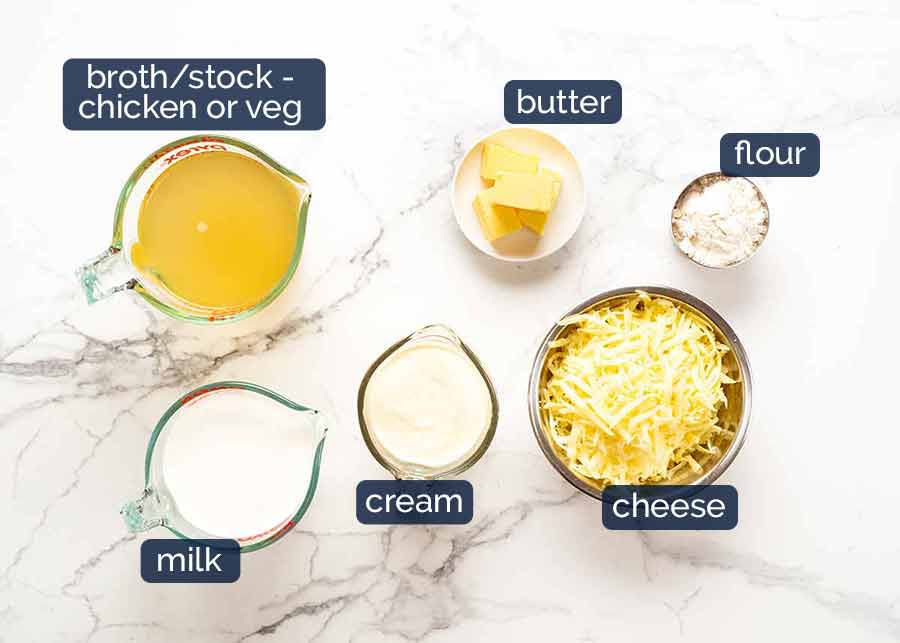 The basis of Tetrazzini sauce is a béchamel sauce. While a basic béchamel is made with just butter, flour and milk, for Tetrazzini, we dial up the deliciousness by adding chicken stock (for flavour), cream (for richness) and cheese (a good thing in anything!).

What goes in Chicken Tetrazzini

As for the pasta bake itself, here’s what you need: 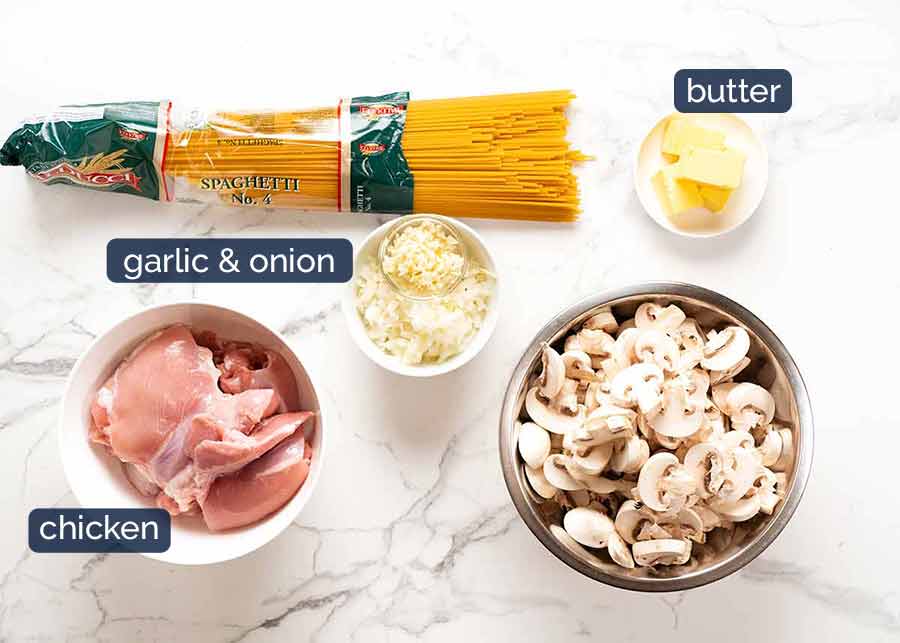 How to make Chicken Tetrazzini

Cook the chicken first because the golden bits left in the pot will dissolve into the sauce which adds a stack of flavour. The chicken doesn’t need to be fully cooked through – once chopped into small pieces, it will take mere minutes to finish cooking in the oven.

Skip the shortcut store bought roast chicken. Cooking your own is so much tastier because the sauce gets a massive free flavour boost from deglazing the pot. 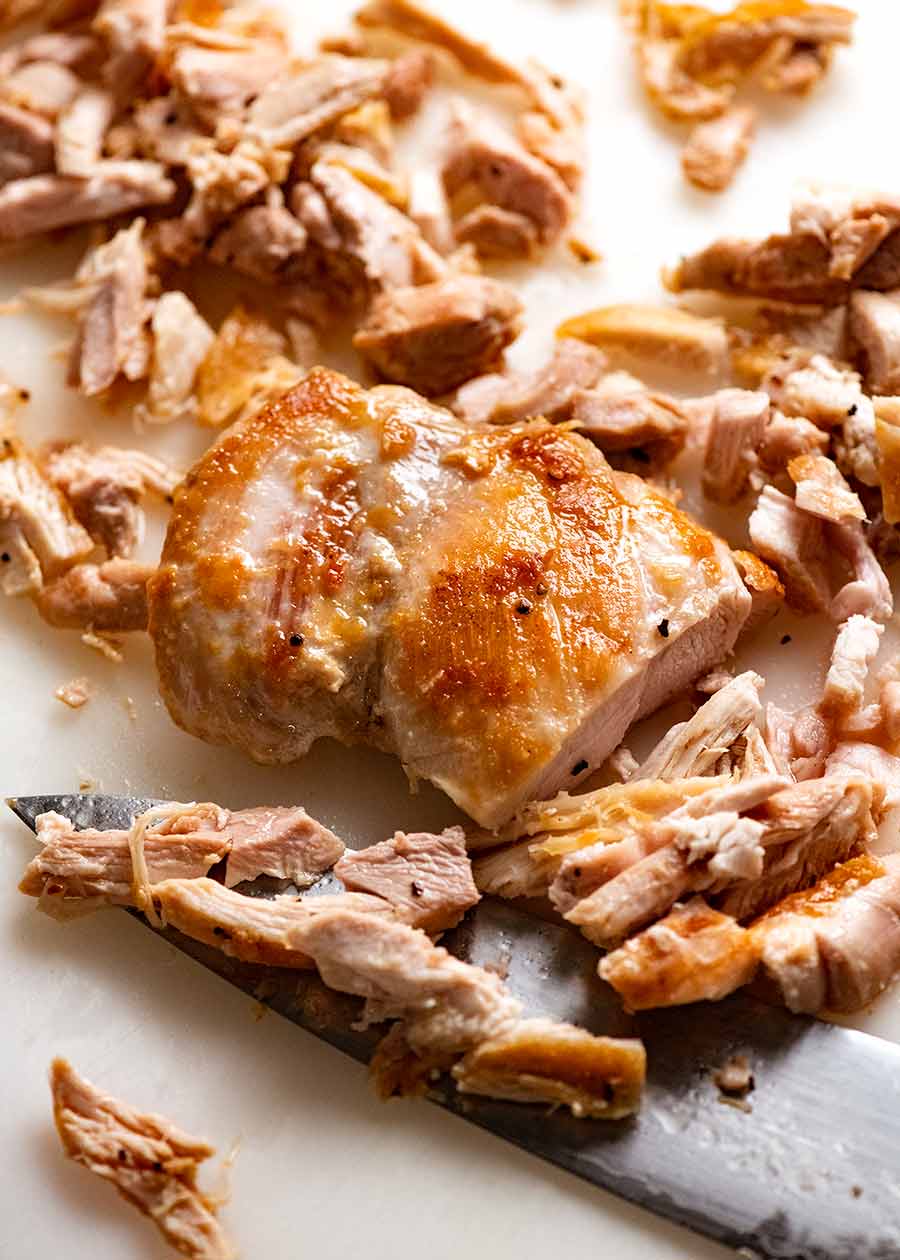 After the chicken is cooked, we cook the mushrooms and onion, then mix in the flour before adding the liquids. This is an easy method to ensure your creamy sauce comes out smooth rather than with flour lumps without the need of a whisk or slowly pouring the milk in. By mixing the flour into the cooked mushrooms, it gets dispersed which makes it far less prone to lumps when the milk is added. Tip of the day! 😎 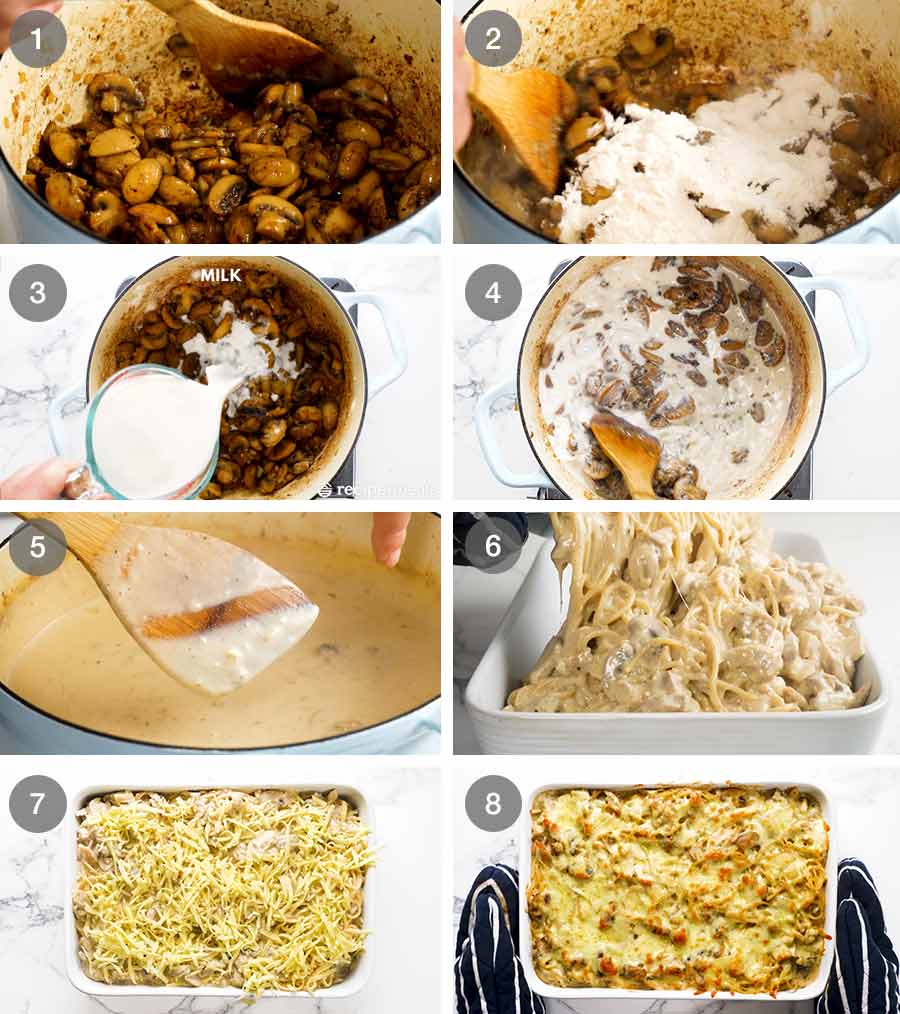 How to tell when the béchamel sauce is thick enough

Use the “path” test (Step 5 above) – coat the back of your wooden spoon with the sauce, hold it vertically (so the sauce is dripping off it). Then use your finger to draw a line across it – it should hold briefly before the sauce runs down to cover the line up. This means the sauce is thick enough. 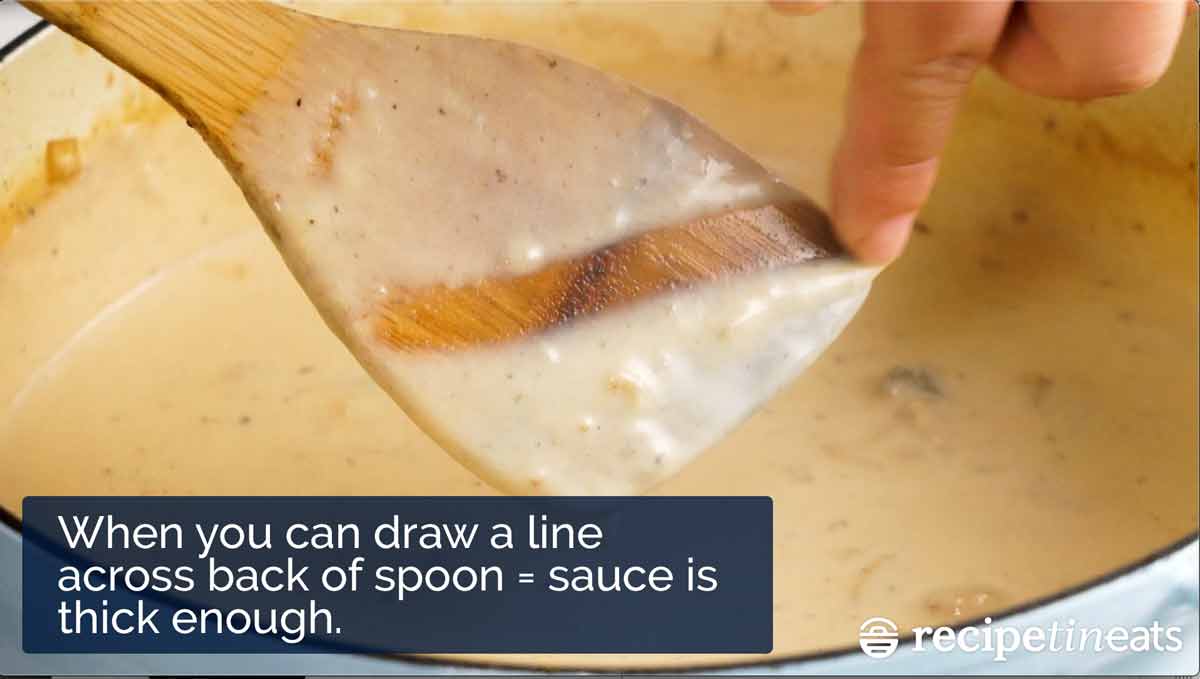 TIP: The sauce should not be very thick – it thickens more when cheese is added and again when baked. 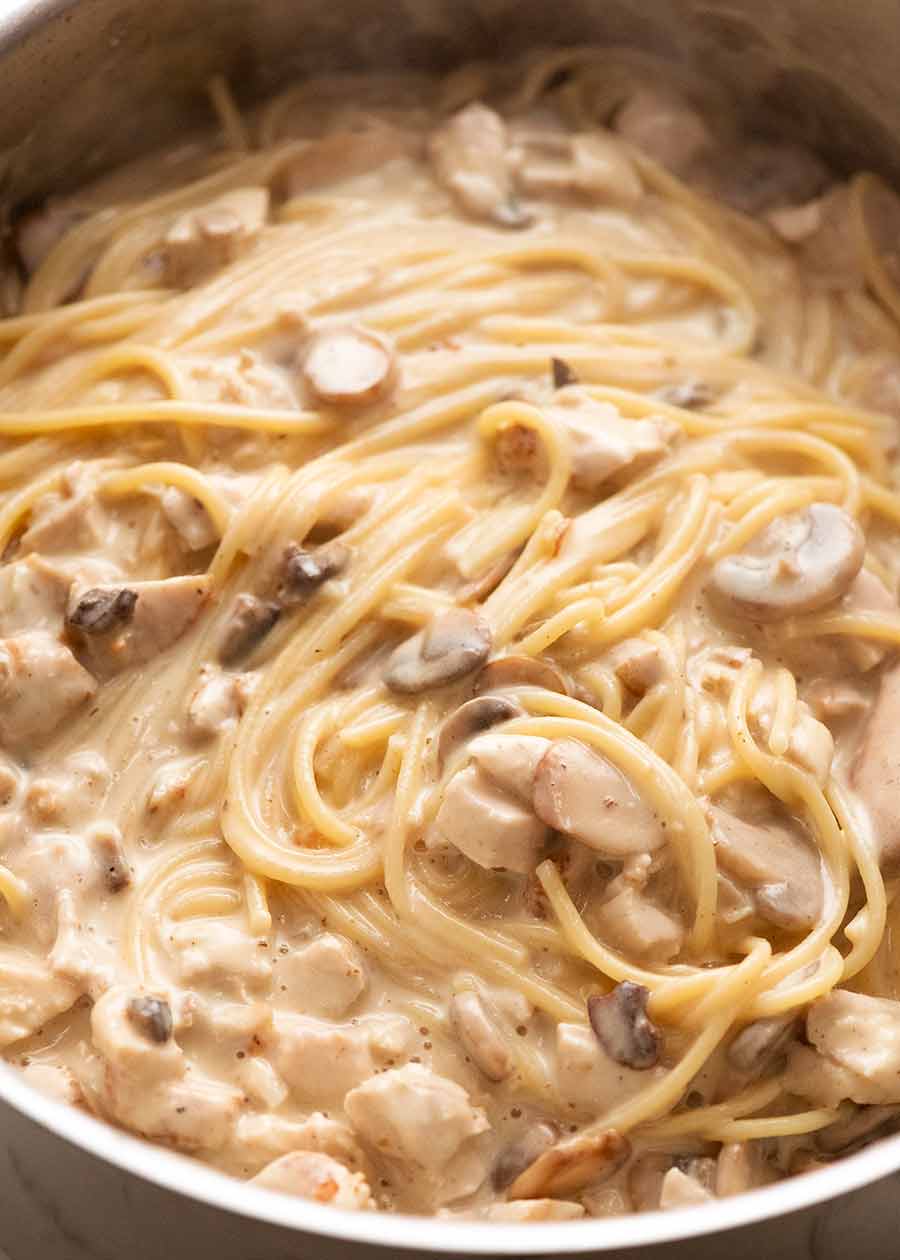 Plenty of sauce – because nobody likes stodgy pasta bakes!

As with all my pasta bakes, I make more sauce than most recipes because I like my pasta bakes to come out of the oven molten and bubbling, smothered with sauce rather than a dried up stodgy block that you can cut like cake. No thank you!!! I want THIS ↓↓↓ 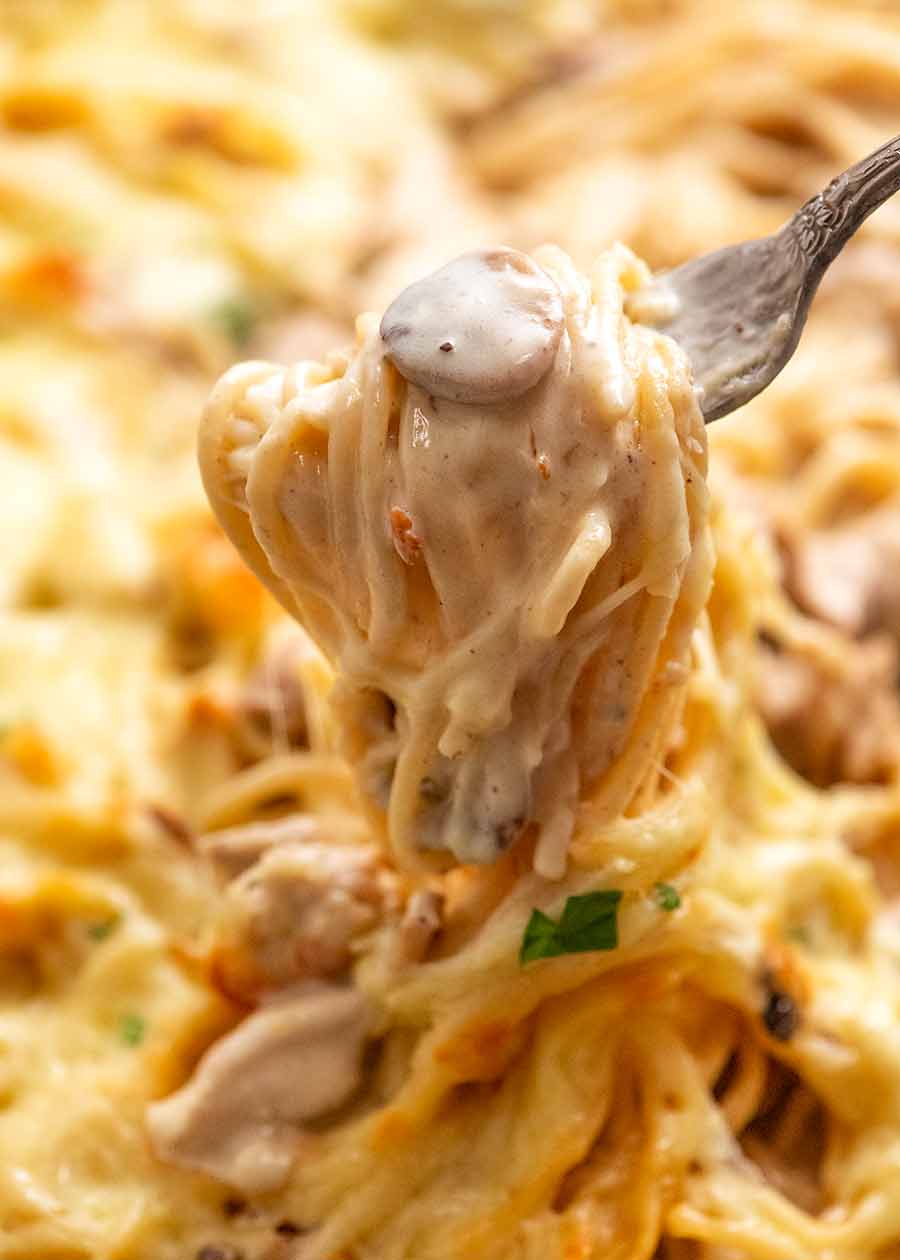 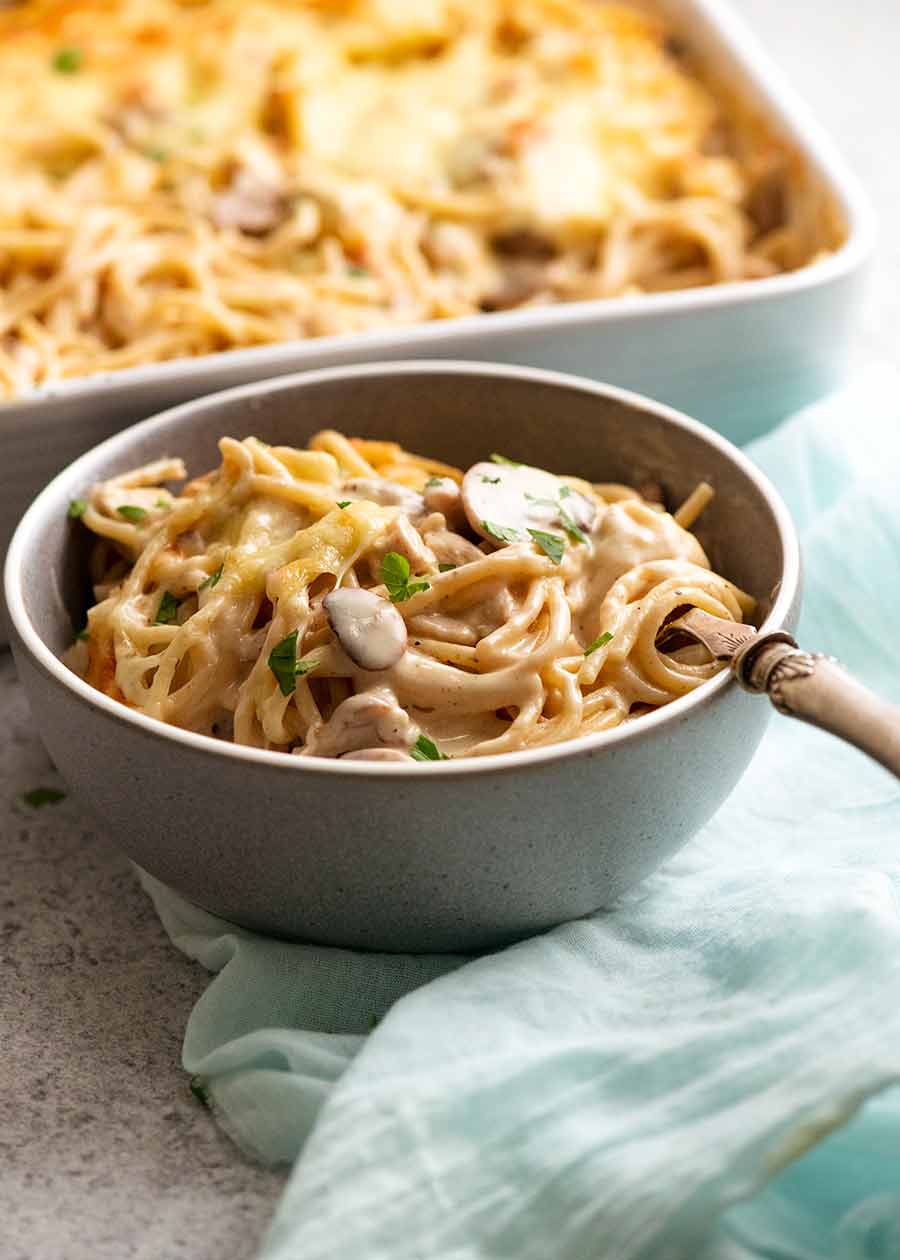 What to serve with Chicken Tetrazzini

I’d strongly urge you to add a side of greens – have a browse through my Vegetable Sides (newly organised by vegetable!).

For dessert, try Tiramisu if you want to keep with the Italian theme, or if you’re going for a cosy Winter meal, make a pudding! Try one of these:

Watch how to make it

Tap or hover to scale

Recipe video above. A big, creamy pasta bake with juicy chicken and mushrooms. Cheesy, hot and completely delicioius! Rumoured to be named after an Italian opera star Luisa Tetrazzini when a Chef created this dish for her.

1. Pasta – risoni/orzo and other tiny pasta won’t create enough volume for this recipe, Either use this recipe, or cook double the amount of pasta.
2. Chicken – thighs best because they stay juicier in things like pasta bakes where they’re cooked for longer than ideal. Breast and tenderloin fine too.
Can also use store bought rotisserie / roast chicken but sauce flavour won’t be as good – dissolving golden bits on base of pan from searing chicken (“fond”) adds extra flavour into sauce.
3. Cool pasta = absorbs less sauce while in oven, so pasta doesn’t bloat and you don’t end up with a thick, sauceless pasta bale.
4. Substitutions for creamy sauce ingredients:

5. Leftovers – Store in the fridge for up to 4 days, reheat in microwave. Keeps better than most pasta bakes because this is saucier so you don’t end up with sad dried up stodgy leftovers.
6. Make ahead / freezing: Toss hot pasta with dab of butter of drizzle of oil (stops it bloating), then let it cool. Cool sauce, toss with pasta and assemble pasta bake. Fridge 4 days or freezer 3 months, thaw then bake 40 minutes loosely covered with foil (remove for last 10 min). OR bake from frozen – foil covered for 50 minutes or until centre is piping hot, then remove cover and bake until cheese has golden spots.
7. Nutrition per serving. Cut 60 calories by switching cream for more milk, cut a further 75 calories by switching the cheese with 1 cup parmesan cheese (stronger flavour so you need less).

One o his best features. (Minus what looks like a big boogie up his nose 😆) 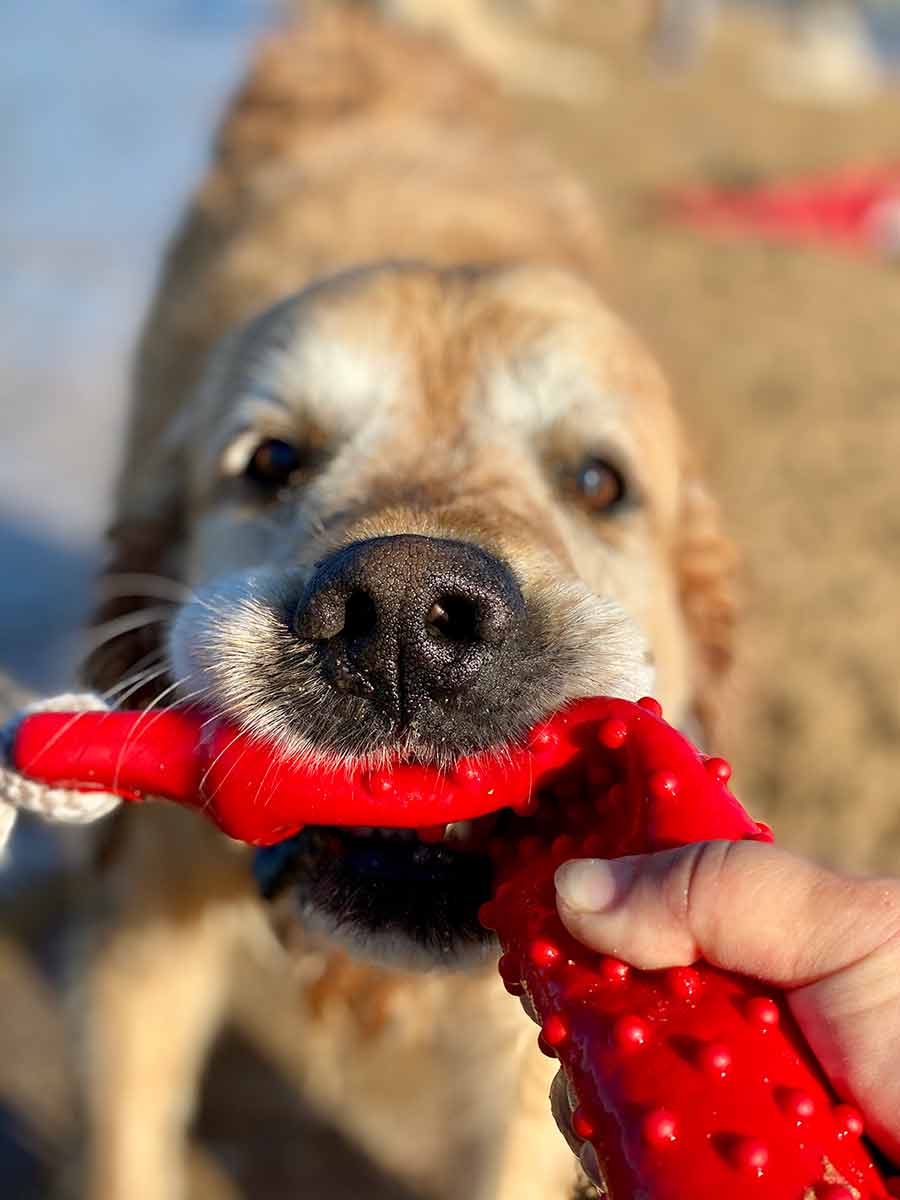